A property with various influences 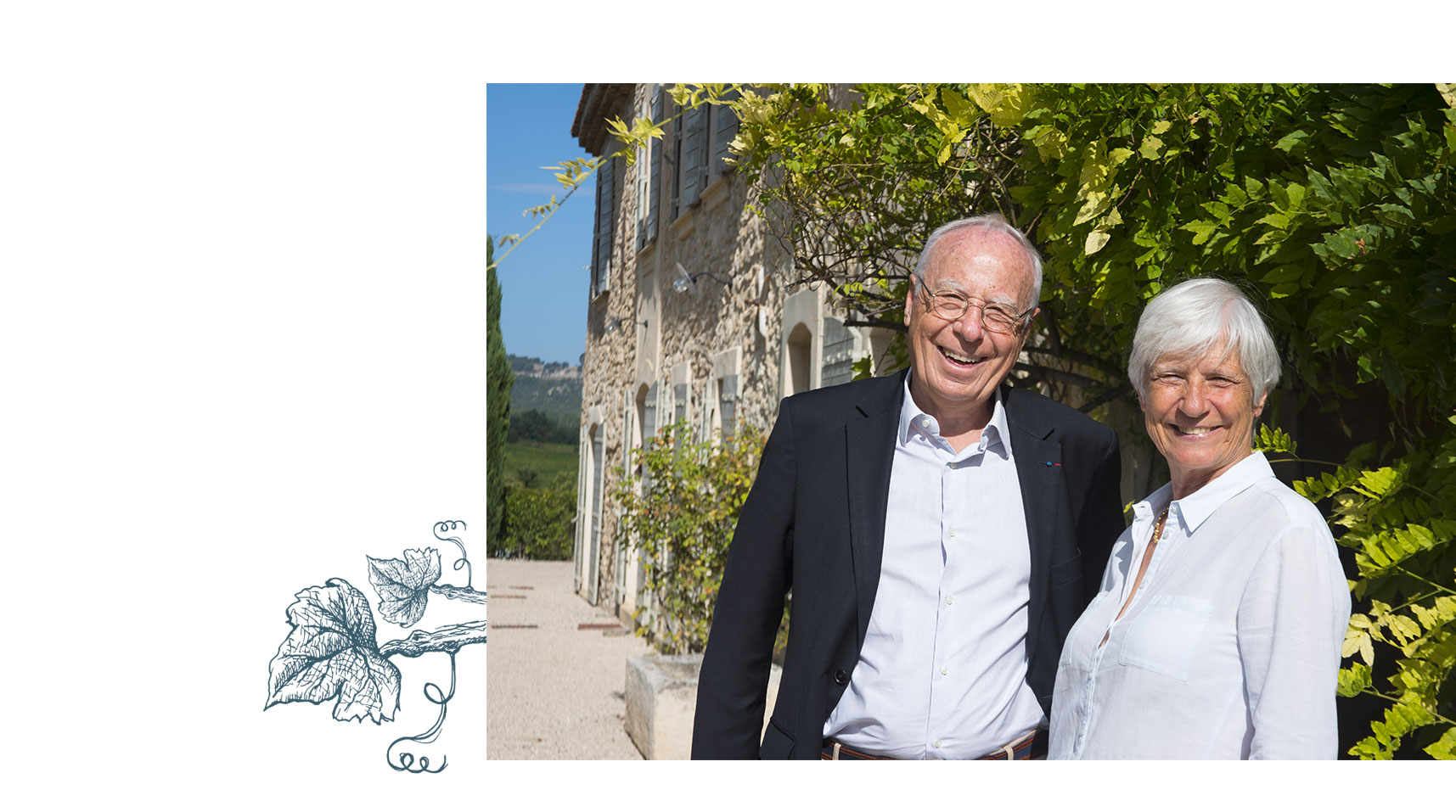 The first vineyard plantations on the grounds of Château Paradis date from -600 JC when the Phoceans settled in Marseille and introduced this prodigious plant. Subsequently, in -21 JC, the Romans decided to build the "Villa Regina" and a Gallo-Roman agricultural establishment that had a grape press. Even today, near the Paradise plots, it is possible to find pieces of tile or terracotta buried in the ground that reflect the remains of the "Villa Regina".

The lands of Château Paradis were sold to different owners in the years that followed, but they have always been linked to the culture of wine and Provence. In 1980, we witness the birth of Château Paradis. The estate belongs to Jacques Héon, a Franco-German passionate about wine and especially white wine. He plants several hectares of Sauvignon Blanc and Grenache Blanc. In 2003, he sold the vineyard to new owners, Philippe and Juliette Deschamps.

They rehabilitate the original bastide, which previously was an old farmhouse. Subsequently, they build the winery and cellar to allow the estate to exit the status of cooperator to become owner harvester. Château Paradis opens a new page in its history.

Since 2011, the Thiéblin family owns the property. Attached to their Provençal roots, Xavier and Odile Thieblin have at heart to magnify the estate and create local wines with a real personality. In 2012, they restructured the vineyard and acquired fifty hectares of additional vines in PDO, initially belonging to the Château de Fonscolombe. 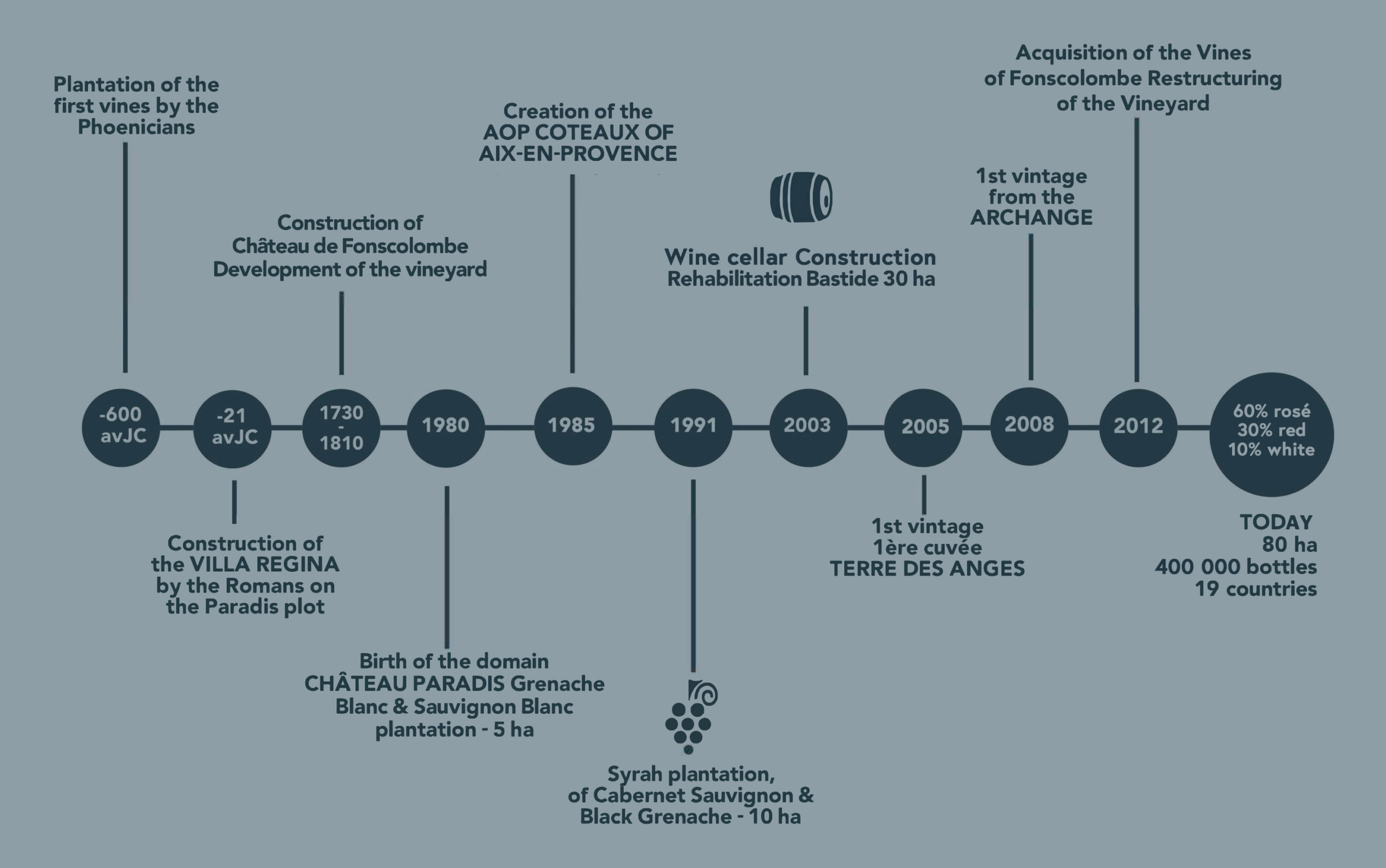 Our Appellation: The Coteaux d'Aix-en-Provence

The appellation Coteaux d'Aix-en-Provence is one of the three western Provence appellations. The area of ​​the appellation covers over 4,100 ha and extends from the Durance to the Mediterranean Sea, and from the Rhone Valley in the west to Sainte-Victoire Mountain in the east.

The landscape of this western Provence is a succession of limestone mountain ranges forming the chains of Nerthe, Fare, Eguilles and Trevaresse, Costes ... The vines are nestled between these moutains chain and on their hillsides.

The slopes of Aix-en-Provence benefit from an annual sunshine of 2,900 hours and a Mediterranean climate influenced by the Mistral.

Château Paradis is to the extreme north of the appellation, where our vines flourish on the northeast limestone foothills of the Trevaresse and lower on the terraces of the Durance. The soils are predominantly shallow stony and sandy clay-limestone over a limestone rock which breaks through the surface in some plots.

Our vineyards are in a very particular geographical situation: the influence of the Mistral wind coming down through the Rhône Valley and the cool air coming down off the Alps via the Durance river allow us the benefit of a sunny, dry and hot Mediterranean climate. This combination of soil and climate gives birth to fine rosé and white wines, which are well-balanced, fresh, fruity and mineral. The reds are well-structured, powerful, fine and fruity.

The reflect of our know-how

Through our wines we wish, above all, to represent our identity and present you with the soul of our terroir. We therefore do everything we can to highlight the specific characteristics of our terroir and the different varieties of vines that grow there.

Our team’s dedicated work in the vineyards allows us to harvest grapes at perfect maturity which only need to express their potential in the cellar during the winemaking process.

It is through respecting this work, supported by Michel Tardieu and Philippe Cambie, that we are able to bring you wines with a terroir identity, the fruit of our painstaking endeavours. In the quest for a sustainable viticulture, we adopted a “reasoned” approach to wine growing. Our soils are carefully maintained to boost microbial life. The wine growing practices used are carried out with meticulous precision to obtain quality grapes.